I like when things just click and work, but some take me months (years) and few approaches (four seems to be magic number) to figure out properly. Curiously it is more about finding easy ways than implementing hard.

Unattended/silent installations minimize amount of unnecessary clicks in software setups and make them fast and convenient.

Unattended installation is a process of installing software without need of user input. Basically it gets rid of stupid next-next-next-finish we all know and hate.

Silent installation is basically unattended installation that doesn’t display anything. It is better for background installs over network and such. For personal purposes it equals unattended one.

I am more used to term silent (and it is shorter to type) so I will stick with it.

To launch silent installs in most cases means addition of command line switches to setup executable. With classic being:

Using such types of installation saves many clicks and even more time because you can queue multiply installs instead of waiting for one to finish to start another.

Unattended installations go hand in hand with complex obscure deployments tools and whole scripting languages (AutoIt was originally tool developed for this). This was what I fumbled with in early attempts and frankly I am glad things moved on to the point where we can get benefits of silent installs in simpler ways.

Nowadays most of software use common third party installers, which mostly come with their own silent switches. Portable is on the rise as well and while it lacks installation itself it is as easy to deploy.

Mainstream bulk packages had recently got some press. As for me they will be plagued by some distribution issues that kill most of portable bundles and if apps you need aren’t included that makes bundle useless overall.

While software docs and site are natural first step, in many cases silent routines are poorly documented.

Many projects (mostly offering abovementioned bulky tools :) manage repositories of information on silent installs for software. Those I found most useful:

If there is no readily available information you can try to figure out type of installer used and look up generic switches for it.

You can try TrID or simply file properties (Alt+Enter on file): 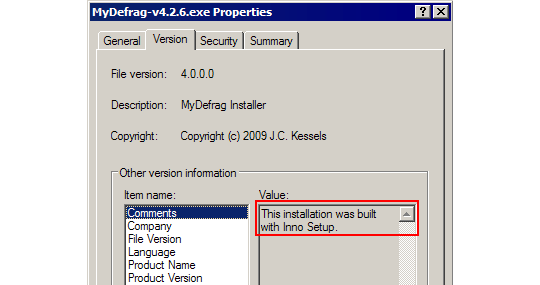 Unattended project page on installers has excellent write-up on common installers, signs that they are used and their silent switches.

Portable may actually have first launch install routine, but mostly it doesn’t bother – and that’s the point. Some people find a flaw in lack of installation and un-installation functions, as for me it is easily remedied.

As for installation – if you have archive it is always easy to unpack it. It will require command line as well, but only as much as more complex silent installs. This method is also suitable for installers that are actually simple self-extracting archives.

For example with 7-Zip you can do following:

This will unpack archive into Program Files (add sub-folder if needed) and suppress overwrite prompts.

I had previously covered Ketarin, which is excellent tool to keep setup packages updated. It allows to keep your own repository and minimize overhead of dealing with updates.

For local usage you can also make it perform automated silent install when packages are updated. You can set variables (such as path to 7-Zip) and combine with native ones (like {file} for current package) to use in command that is run after update detected and downloaded. 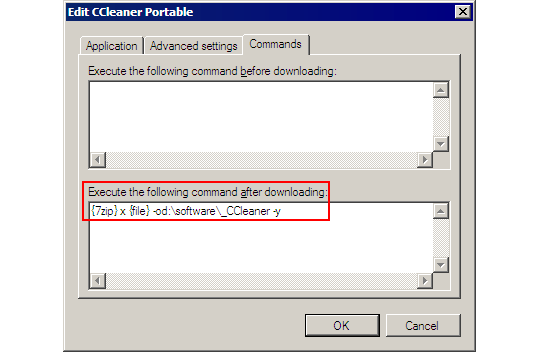 Copy/paste is not too shabby. :) Still my setup packages organization tries to minimize number of folders, so getting just right set of files to copy got tedious.

This is command line script I came up to copy files from flash drive or external hard drive. Quite robust (thanks to robocopy) and easy to manage:

It copies over core packages. Some as portable folder, some as install executable and some are unpacked on the fly. Packages that are changed often are described with masks, so they script doesn’t need to be updated each time.

Now that packages are neatly stacked in local folder it is just one more script to install them in bulk.

It doesn’t make effort to use silent keys, only unattended so progress is visible. For apps, that try to reboot computer when done, there are keys that suppress reboot. There is only single explicit reboot in the end for freshly installed stuff to settle in.

Such routine will not handle precise details (like file associations) but as for me those take unreasonable time to setup and manage. Who knows, maybe in few more years. :)

While there are powerful and complex deployment tools for large scale, they are overkill for more personal level. On other hand even with basic tools and minimal amount of scripting it is possible to greatly streamline software updates and installations.