The app that had already been so important for maintaining setup packages just got whole new level of awesome higher.

Ketarin had started out as unusual spin on software updaters with goal of keeping collection of setup packages in order. But software packages are meant to be used! So recent version got major feature of silent scriptable installation support.

There was already functionality to run custom commands after update of list or specific entries. It was handy for some useful tricks, like auto-syncing with SyncExp after update, but somewhat limited. 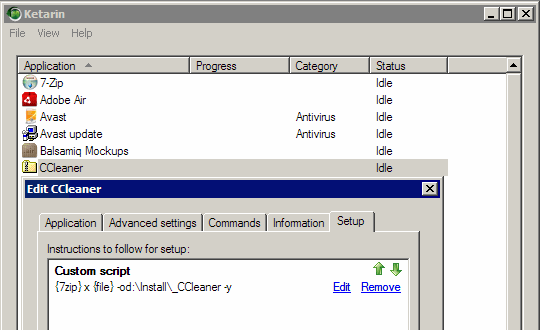 Available (in any combination) actions for setup instructions are:

Apps can be installed selectively or in bulk from context menu. New Install… button at the bottom shows dedicated install screen, that allows to install configurable lists of apps. Initial lists are automatically generated from categories and you can also select and save custom lists. 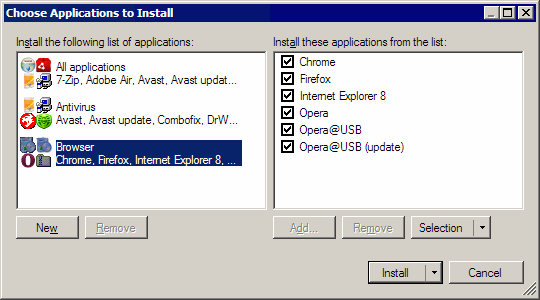 Script snippets in after-update and setup areas can now be easily saved and re-used. Since Ketarin has plenty of macro variables (and you can setup your own) it is easy to write one-fits-many instructions. Where applicable there are helper menus to quickly insert such snippets as system variables and common silent install instructions.

I had encountered a bug – some applications fail to install without Internet connection available. Reported on developer’s forum, hopefully this would get fixed in following versions.

I must note that new functionality hadn’t really lowered learning curve. Ketarin is still primarily aimed and techies, willing to spend time figuring out how to best use and program it.

Indispensable app for software collections just got better. If you have bunch of setup packages and not using Ketarin – you should start like right now.