Ah, it’s been that long already. :) Yes, today marks second birthday of Rarst.net. I didn’t do minor milestone posts during second year so it kinda blinked past.

The more interesting it is to look back and do some obligatory number crunching.

Can’t say growth was as stable… And that there were much of a growth from month to month.

Yet… In second year there have been over two hundreds thousands visits to this blog. 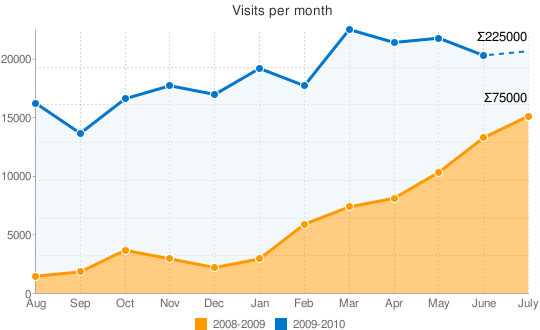 Almost 1/3rd of a million total visits. Doesn’t compute. Seriously. To be able to brush this many people in life, even if briefly, is weird and interesting feeling.

Curiously more traffic does not make linear increase to community and interaction. Traffic is about site gaining age, content and authority.

Community is about meeting people that click with you. People that return to blog again and again. People that leave hundreds of extensive and valuable comments.

In second year some people left, some new faces appeared (and plenty of fresh lurkers I am sure), but it is as much pleasure to interact with you all! :)

In posts most wanted there are plenty of usual suspect and some newcomers:

There had been considerably less posts in second year. I had went over one of reasons in this post and second reason is that most of that year was somewhat rocky for me offline.

Current forecast is one post every other day for nearest future and will see where to go from there. I know that daily or at lease near-daily posts worked well for a lot of regular readers. Well, I prefer to play with frequency rather than sacrifice quality and other aspects for quantity.

Search traffic is becoming more massive as site ages. Curious that there are more direct visits then referrals – says something about my networking skills. :)

Martin, Samer and Rob are my heroes as usual (Rob managed to pull that off doing absolutely nothing, I respect such commitment ;) ! Top or not – I very much appreciate fellow bloggers who link to me and even more so people who spread the good word and deem my posts worth linking to on their favorite sites and forums.

I kinda promised new theme by end of first year… Well, not done yet!

Seriously since I finished programming courses I was able to make some serious progress on it. I also feel more confident with WordPress so amount of custom functionality I want to implement had increased as well.

Yes, old theme is falling apart in places. It has little time left so bear with it.

And so no one screams vaporware here is small teaser of new look:

No changes. Blog’s income had increased with traffic, but so did my hosting bill after moving to LiquidWeb. Was worth it, but I still roughly break even on this.

Nothing is happening until new theme is done, so this is not any kind of priority for now.

Well, I bankrupted on goals from year ago, didn’t I? Actually no, I did reclaim some order in my life. Some bridges were if not burned but ruined horribly… Life goes on. More time for myself and friends, less bullshit I have to put up with across the board.

As for strategic stuff for this blog right now I desire nothing major. I just want to write posts I feel good about, tinker with internals, have occasional holy war in comments and more routine stuff. New theme is priority, rest will figure itself out later.

By the end of milestone post I am traditionally tired and sleep (ain’t I always). This was rocky year, the more accomplishment was to get blog through it.

Off to sleep, knowing I will awake to some warm comments from you waiting. Lurker or two coming out will be fitting for occasion. ;)