In my post on choosing portable antivirus I’ve mentioned problems that background monitor antivirus solutions have if system is already infected. Portable scanners are good tool but even they won’t be able to deal with serious infections.

Software comes in form of ISO image that you must burn to CD (as always I suggest CDBurnerXP to do that). Image is under 70Mb in size so will fit even on small 8cm CD discs.

After you boot from disc…

…select DrWeb LiveCD option when prompted and it will boot (disc is Linux based) and show you list of options available.

Strangely supplied manual shows quite different graphical user interface from what LiveCD actually has. Either it was simplified or not yet finished - I have no idea. 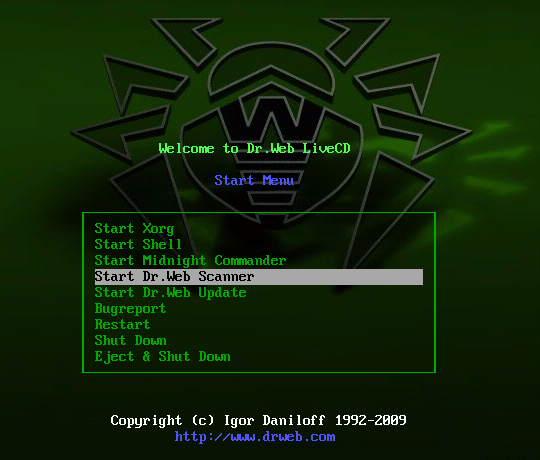 There are only two menu entries actually needed:

DrWeb LiveCD updates are similar to DrWeb CureIt – you have to re-download entire image to get fresh databases included. Live update obviously can’t write bases to disc and won’t work with plenty of Internet connections.

I’d also like to have more control over what to scan and skip – something that is described in manual, but not present in actual software.

Manual list instructions to make bootable flash drive from ISO image. It requires booting from LiveCD in command line mode and playing with Linux commands a bit. I hadn’t tested it myself.

Free, solid antivirus solution to handle most serious infections. No need for custom Windows LiveCD as with most portable scanner. Not something needed daily but extremely helpful in deep cleaning routine.

PS In case you are wondering how I made screenshot from LiveCD – I had used VirtualBox for that.