Some of common modern network tasks (such as torrent) require rapid connections to multiply hosts. This is also quite common pattern of viruses spreading over Internet so in its infinite wisdom Microsoft had crippled Windows XP to ten half-open TCP connections only.

App makes modification to system file. Which in general case is bad idea. In this case however modification is simple enough and process was quite polished over years so it is as safe as such thing gets. 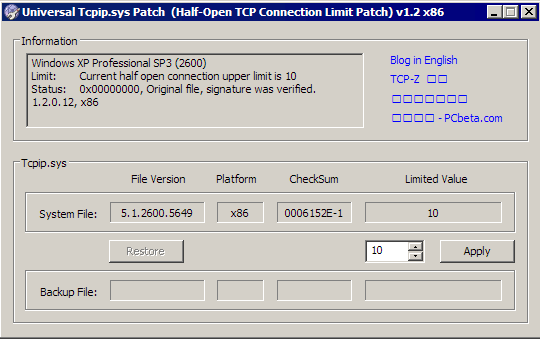 Interface shows current state of file and allows to make change to any number of connections wanted. 50-100 are generally suggested values.

I have mixed experience with fixing this value. Sometimes it does nothing obvious but in some cases there is drastic network performance improvement. Definitely good addition to those best torrent settings and tweaking TCP settings. Case by case for rest.

PS Vista SP2 and later, as well as server versions don’t have this limit.