It took Google Wave months to go through initial excitement, people trying to make sense of it and discouragement with half-baked product. Google Buzz managed to burn through same cycle in a week.

So what exactly Google tried to pull with new Buzz service and why it is neck deep in negative feedback?

Buzz is Gmail expansion that integrates it with multiply Google services, as well content from non-Google sites, to syndicate your content together and get content of your mail contacts syndicated to you. 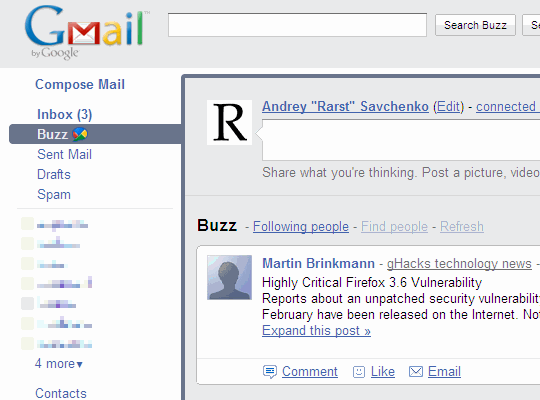 What they got right

Buzz has started on the back of massive Gmail userbase and got excellent jumpstart from that. Some people treated it as bad thing to boast about, but really – if you have such resource it completely makes sense to use it. Starting from scratch in this case would be just dumb.

Some streams Buzz can integrate are common (Twitter, ahem), but it also can stream info from generic sites. As far as I can tell it doesn’t even use RSS – I had some older posts show in Buzz after edits. I assume it makes use of sitemap or just raw data from Google bots.

What they got wrong

Buzz got extreme amount of negative feedback over implied privacy issues. There were two main revelations:

As for me Google got Buzz into the middle ground and it was wrong choice:

Instead they hit being thing that is too raw to be solidly valuable and too weird for immediate mainstream appreciation.

Aside from panicked rounds of idiot-proofing privacy issues, it seems that Buzz might take second route and move farther from Gmail into distinct separate service. Will see how it goes.

As for my personal gripes – Buzz broadcasts stuff I already read elsewhere and forces itself on other services like Gmail and Google Reader in rather inconvenient ways. The things that allowed it to take that jumpstart also highlight that there is not much interesting about Buzz itself for now.

Buzz seems like Google’s experiment into new type of release cycle. Instead of squeezing product through limited number of techies it tried to leverage large mainstream userbase.

At this moment it is:

All interesting things to know, but I suspect Google is not likely to openly discuss.

Do you use Buzz? What is your take on it?