In recent months I happened upon multiple unrelated posts on how Twitter is getting worse. Either in general or for the person writing.

And I couldn't stop thinking it sounds opposite of my perception. I am confident Twitter is getting better for me. But I was suddenly unsure if I can say is it getting better.

I remember how much more people fixated on Twitter numbers. Follow and get followed. The more the better. It's not like there are other things to do here, right?

In those days the most popular way of reading timeline, promoted by much followed social media gurus (har har), was “the river”. Don't focus on tweets, focus on experience. Read when you can and if you can't then it is just as well. After all it's that number of followers you are here for.

I called bullshit then and still do.

Don't complain your experience gets less, if you don't make effort to build it out of friends and meaningful messages.

At some point I gravitated to the practice of reading every tweet in my timeline. I make couple exceptions for app–generated tweets and sometimes excessive promotional ones.

I am following these people because their thoughts are important to me. So their tweets are important to me. All of them. I catch up on my timeline every morning, when I am at my computer (which is most days). I read every tweet during the day. I let myself off the hook without any guilt when travelling, but that's rarely.

Reading everything puts the end to numbers game pretty fast. I tend to have spurts of following and unfollowing people. I had noticed soon that my timeline starts to stress me at 130 following mark. This is my practical limit, I am staying under since.

At the moment of writing this it is 100 sharp.

And they are anything but noise. They are what makes me think, feel, ponder, program, wonder, question, write, talk, and laugh every day. Some of them are friends, some of them are not. Some of them are private. Others let me know their lives, careers, families, pets, and coffee habits through that keyhole of their tweets.

These are not exactly same people all the time, it is a small cloud which keeps changing. But permanent or temporary, I can't imagine this cloud ever grow less as a whole.

At start the Twitter was a river not just conceptually, but technically. The timeline was the one single view. Third party clients did annoyingly little over rebroadcasting it in different platforms and colors.

Bit by bit it grew out of it. Informal mentions became real mentions and notifications, then threaded conversations. Retweets and stars formalized distribution and taking note. Hashtags became ad–hoc virtual threads for topics.

In the long run Twitter wasn't kind to third party clients. It learned from them and community, then kept community for itself and stepped on the clients. It was selfish. And it pushed the main service forward too.

Right now I use TweetDeck (now owned by Twitter itself) and it had come a long way from those lonely timelines of early days. 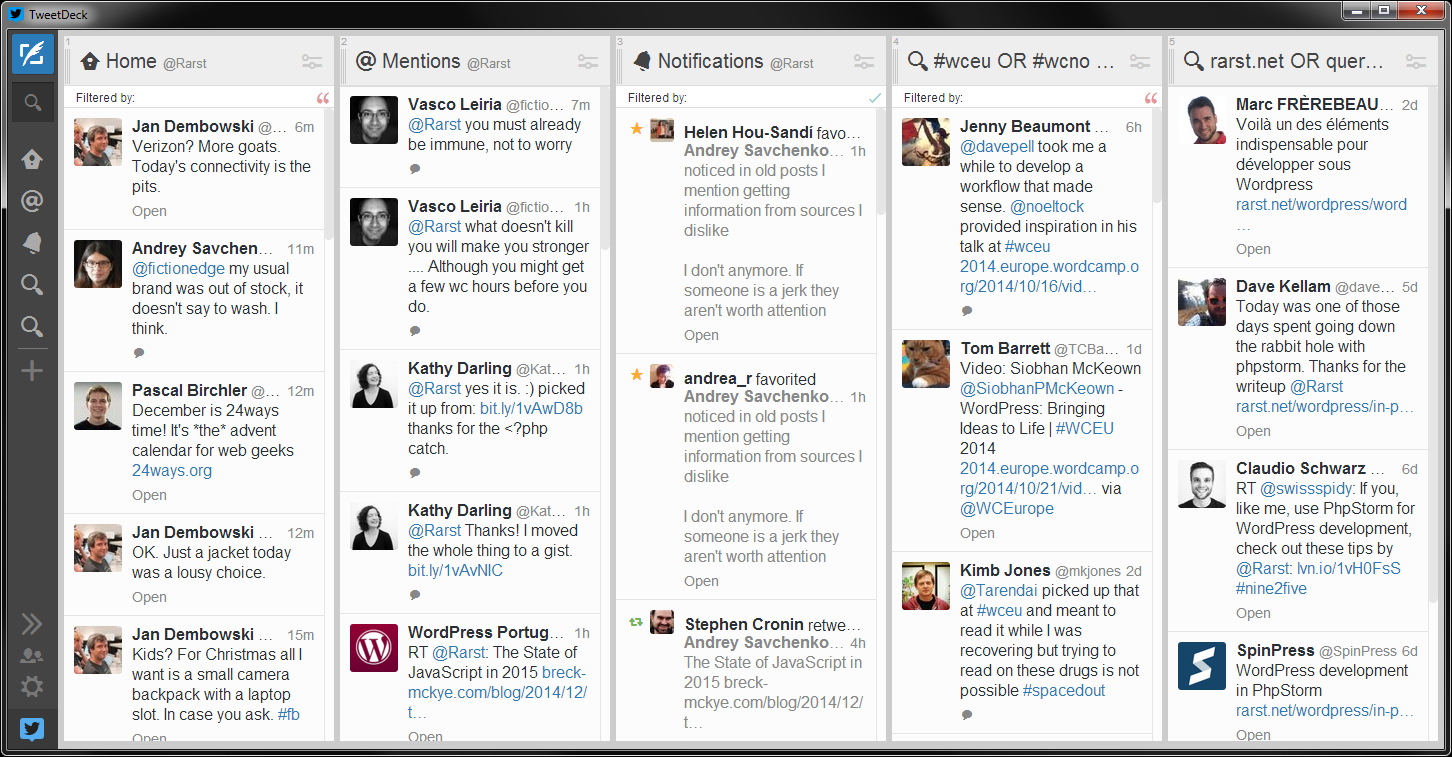 The five columns I have configured are:

When I started drafting this post in my head I thought this is were I am going to declare Twitter the smashing success for myself and wrap it up.

Then it flooded into my head how instrumental Twitter was and continues to be for people who use it for harassment online. How some of the people I follow sometimes raise their fears about being on Twitter, and how sometimes they choose to step away for a while. How I see the lock of private account appear and how it makes me worry if they are fine.

The power of Twitter for me is that carefully crafted and maintained experience. Once I formulated it like that — it hit me how fragile and unprotected that experience actually is.

You can choose what to tweet and read, but you cannot choose what people tweet at you. You cannot shape that part of Twitter, more so you cannot get the Twitter itself get its destructive side under control. You cannot even leverage the community you have for some control over it.

Twitter tore down the walls between people. It is refreshing and it is terrifying.

As a company Twitter is aware of it. They got good excuse in their scale. Excuses are not good enough. You cannot create safe and reliably welcoming environment without community participating in the process.

I had never been at receiving end of such. My experience is still all pleasant and cool. But I get now that I am aware and wary of such day coming more than I had thought. And that I don't believe Twitter to be there for me on such day.

So there you have it. Twitter gets better for me.

And in writing this I had to face that I can only hope it gets better to the point of its magic to lose that undertone of fragility and fear.

For me and everyone else too.