So I had Wave account for some time, thanks to invitations from regular reader and commenter xangelo of Feet Have Been and rennablue of… I have no idea who this is, no hits in any contacts. :)

By now there is enough stuff on Wave posted to confuse anybody, so for for those who have access to preview version or not either – let’s carefully go over established facts and look at what is defined for sure. 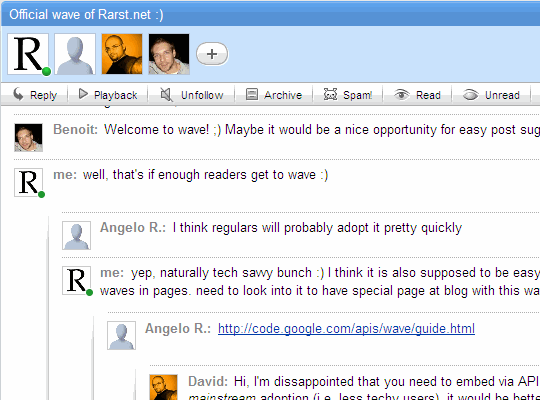 There is already myriad of definitions for Wave. My issue with those – they are precise, while Wave is actually very general thing.

Wave is foremost communication platform that defines core features and options for building on top of those.

While existing tools and services aim at maximize convenience of usual means of communication, Wave gives you tools to work out own style, pace and form to communicate in.

At down to earth level – Wave is exclusively (for now) Google service in early development stages.

As of now it is defined as preview. It’s not even beta, and most certainly it is far from Google’s (very broken) definition of beta.

Wave is full of people who signed up just-because and those who genuinely try to make sense of it. In current stay it is playground and far from valid tool.

While intuition is subjective, it rarely fails me when poking new product. As for me Wave feels right. It is flexible enough to allow complex communication thread with multiply people, yet manages to keep structure intact and prevents talk from falling apart.

While Wave as form of communication is impressive, Wave as web app is much less so. Some interface decisions defy staples of usability (custom scroll bars, seriously?) and it all clunks as generic web2.0ish stuff in a bad sense.

Luckily form here is of less importance and given open nature of platform it will be ironed out… or undercut by better alternatives.

Why bother with Wave

For those who enjoy Dilbert comics as much as I do – Wave is classic attempt by single company to hijack new industry standard. :)

There is thin balance here:

Ideal Wave scenario – it replaces email as primary online communication pipe and cannibalizes as many other pipes as it can while at it.

What I find most interesting is that other large companies have no symmetric answer to Wave. I see several distinct possibilities:

In my opinion for regular user there is no gain to invest in using Wave early and there is no loss to ignore it either. It might become common and essential but that possibility is hardly set in stone.

Wave is giant project with high potential that will play out depending on two factors:

Have a Wave account already? Add me rarrst@googlewave.com (I hate extra R, who knew it will haunt my Google account forever) and come chat blip around at official Rarst.net wave.