After many remote access apps covered, I am still not done (sadly) finalizing what to use. There is very fine balance of functions, security and trusting third parties in all of this. I had covered TightVNC, which is my first choice for local network VNC. Around that time development seemed dead and shortly after TigerVNC fork had appeared.

This spring there is development on both fronts with fresh betas of TightVNC and TigerVNC reaching second stable release. So, does TIghtVNC have anything to worry about?

As all VNC apps for remote access this one consists of server part and viewer to connect with. App is cross platform. Windows version comes in form of installer, that can set server as system service right from the start.

App seems to take its self-appointed role of improving TightVNC seriously. No stone was left unturned in interface. As for me settings and option were re-grouped in more consistent and logical way. There are also less technical terms to get in the way for no good reason.

Server got handy window to control clients and dynamically change their connection mode. 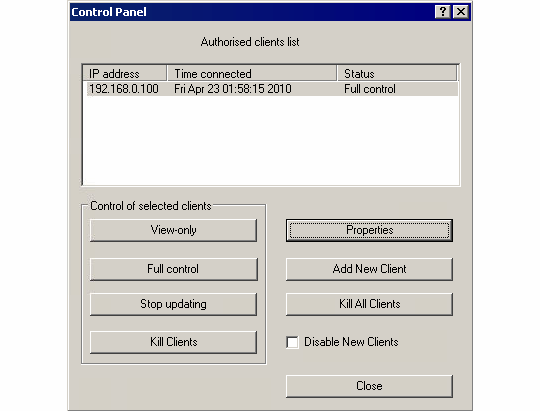 Viewer got slimmed down to single server name input.

There are still some interface hiccups. I almost locked myself out of client computer by going to full screen mode and not knowing how to came back (F8 calls up menu). Saved by floating Samurize indicators, that allowed me to change focus and call up Start menu.

Encryption and Windows-based authentication seem planned, but are currently grayed out in interface. Not safe to use over public channels, just as TightVNC isn’t.

No file transfer. Not a big thing when used in LAN, like it should be, but still annoying.

TigerVNC without much trouble claims the position TightVNC commonly occupies – easy and relatively convenient tool for hoping at local network computers. However without encryption implemented that is as far as it goes for now. With that single feature it can easily undermine more functional solutions like UltraVNC, that are also way more complex.