There is good software that doesn’t mind being uninstalled. Decent uninstaller is all you need.

There is bad malware that doesn’t even have uninstall option. Sweep with antivirus or two usually handles that.

But sometimes app is decent but so bloated and struggling to stay in your system that getting rid of it becomes a problem. Luckily after few millions of complaints developers of such release special removal tools for their products. It’s not widely known so here I am spreading info.

General protocol for these is :

Removal tools often refuse to run if app is still installed. In case uninstall is not working you have to remove uninstall entry first. Revo Uninstaller handles that easily.

Also don’t forget to write down serial keys if you want to reinstall later, they are going to be wiped from registry.

Symantec is really well known for sticking their products wherever they can. It’s business for them but for users getting rid of this stuff gets boring quickly. 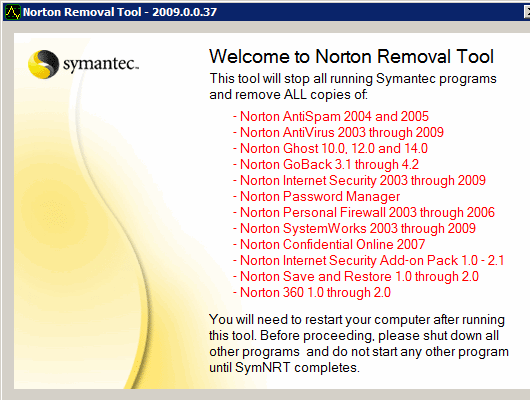 Nice straightforward removal tool. Handles ton of products including old ones. Comes in two versions for Windows 98 or later.

Nero is probably most known software for CD-burning. Also most known example of software bloat. It went a long way from light burning utility to giant software bundle that almost rivals Windows itself in size.

Removal tool handles most of Nero products. It prompts for manual selection of directory to cleanup but tries to search for items to remove on its own as well.

Side note - check out my post on CDBurnerXP, it is everything Nero stopped being.

Nokia is world largest mobile phone manufacturer. Connecting their phones to computers is handled by unified PC Suite software. It got better and more stable in last versions but still it puts a lot of stuff and drivers in the system which may cause problems.

I hadn’t opportunity to test latest version (lucky me) but previous ones saved me from drivers trouble few times.

This one is bit different. It comes from 3rd party developer and instead of targeting specific products tries to uninstall whole bunch of apps that usually come pre-loaded on new PCs. It is also written in AutoIt which is not very relevant but shows amount of stuff you can code in that language.

Not really designed for cleaning up overused PCs but perfect for new ones.

Most of removal tools are portable. Or at least create much less garbage than remove. :) Not something needed daily but it’s better to know about them than not.