I have bit of love-hate relationship with this file manager. It is one of the few modern and free managers that try to uphold classic dual-pane paradigm. On other hand it manages annoy the hell out of me in actual usage.

So, taking apart what can it offer and what it can’t.

App has two panes split vertically (or optionally horizontally) in line with classic file managers. It is suited to work both with mouse or keyboard and set of historically established hotkeys. 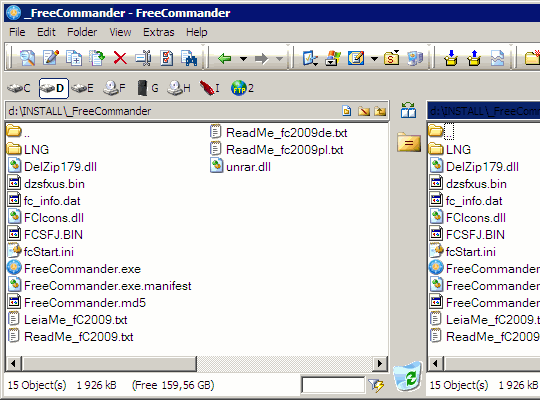 FreeCommander is highly feature-packed with many internal functions and tools, including:

For all strong features I personally feel like they overshadow important usability aspects:

Overall performance seems mediocre (you don’t know fast file manager until you’ve seen Snowbird). Icons are especially annoying and constantly being re-drawn which makes them flicker when switching between directories.

It also uses Windows native routines for file operations (copy, move,delete, etc). Works most of the time but not really common or desirable in third party file manager.

App was developed quite actively, but pace had slowed down to a halt, with only two releases in last year. From searching app’s forum it seems that next minor release can be expected some time in next six months and next major version is at pre-alfa stages (site has screenshots that show large changes in interface).

FreeCommander is seriously feature-packed file manager, one of the strongest free and natively portable (stand alone or in PortableApps format) options at moment.

But despite following classic formula it has considerable interface and performance shortcomings which makes it inferior to more hardcore alternatives.