Ping is one of the most basic and useful network commands. It sends request to networked computer and waits for response. It’s easy to ping single PC but it’s pain to ping dozens (or even hundreds) of them.

Network scanners are the same ping command deep inside. On the outside the are equipped with graphical interface made for targeting and displaying responses of multiply computers in one sweep.

Don’t bring this to work for playing around. Your admin is going to be very unhappy about the flood of pings. Unless you are admin of course. :) 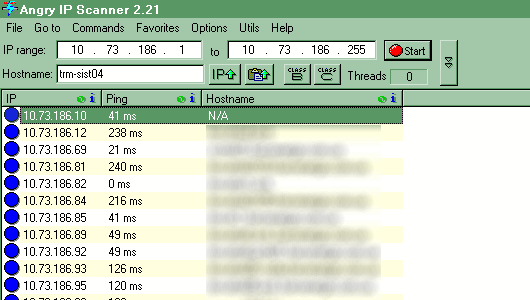 This one is old and proven tool. It is designed for speed and delivers initial scan results as fast as it is possible. Rest of functions are secondary and some must be downloaded separately as dll plugins. What annoys me greatly is that Angry tries to treat every dll file in same folder as its plugin. Generates bunch of errors on every start unless put in separate folder (which I dislike to do with portable).

New 3.x version is currently in beta, but since it is going to be java based my guess is plenty of people going to stick with sufficient 2.21 one.

Freeware and open source (GPLv2). Works without installation but writes settings to registry. Menu has option to clean up those registry entries so it can be roughly considered portable.

Newer and fancier. This app packs more buttons, more options and more everything else out of the box. Cost for that hits hard - speed and stability suffer. It scans more stuff by default so it takes more time. Froze on me two times when I was playing with options and rapidly starting/stopping scans.

Interesting function is Live Display that continues to monitor and update report after initial scan. Doesn’t make it network monitor tool but may come handy at times.

Freeware. Writes setting to registry by default but can write them to local directory if started with /ini or /xml command line arguments - making it portable.

Which one to use?