It is interesting just how much cheaper and powerful notebooks became. Still it is first time I got to play with sub-$500 one and I was most curious what such sum buys nowadays.

Before some start about Linux, it was excluded because of some Windows-only vector graphics software (isn’t there always some). And you are so not getting virtualization performance on notebook this cheap.

Choice of notebook was more for convenience than moving around. So large (cheaper) and heavy (cheaper) model. With Vista Home Basic (cheap). 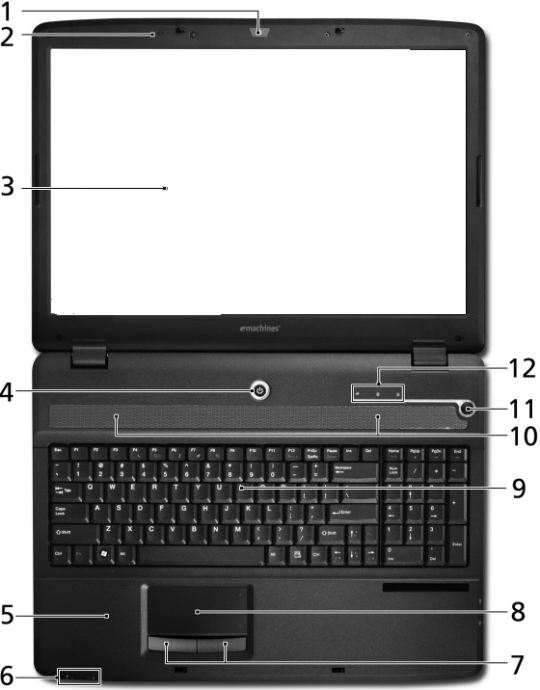 Image courtesy of user guide, because at this price press kit was apparently saved on. :)

Keyboard is large with numpad block and feels hardly different from generic desktop one.

The only annoying thing about build quality – battery is loose (not that sane person would use it other than desktop-ed). By the way power brick is one of the smallest I seen (half of my Dell one) and it gets really hot.

One of worst cases of pre-loaded crap. Not as much from quantity but with choice and low hardware completely unsuitable for that.

Out of the box it was practically unusable from software bloat and poor default settings of Vista. Initial Windows update took almost two hours to complete.

After carefully cleaning out all unwanted extras and tuning down Vista’s visuals (Basic doesn’t have fancy glass but composition engine still works and hammers integrated graphics) it turned out to be quite usable.

After installing antivirus notebook got noticeably slower again. I had no opportunity to run tests (and I don’t trust them much anyway).

As for me it feels that processor is sensitive to multiply tasks running and even two cores don’t help it much at low clock and only 1MB of shared cache.

To get (and keep) such notebook in shape some serious attention is needed. There is simply no hardware to compensate for crap that comes pre-installed (or gets installed later by user).

At these price and specs notebook is purely work/educational/whatever tool. There is little multimedia potential outside of audio/video and low-end hardware will struggle with a lot of tasks. I think it is probably best to think of it as large form-factor netbook.

Still for such a price you get very affordable PC with convenient screen and keyboard.