SQLite is interesting database management system (sounds boring) that usually works behind the curtains as component in various software. For example it is used in Firefox to store bookmarks and other stuff.

I had need to do some programming making use of SQLite and drafting database in native command line tool felt clunky. After some time I encountered SQLite Expert Personal which is nice graphical front-end for designing (and more) of SQLite databases.

App allows to do most of tasks in easy and graphical way: 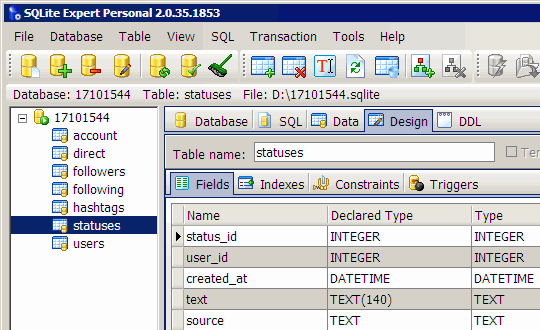 It has excellent interface with large buttons, fonts and fitting use of zebra tables. There is even decent help file on top for which I don’t look often but appreciate when exploring new tech.

Considering SQLite Expert has commercial Professional version it was a given that there will be limitations. Some of them are for advanced features but I was unpleasantly surprised to see some functions basic for native utility blocked.

Among other things missing there are no:

I can understand cutting more complex stuff but lack of even basic dump of database into SQL statements is more than annoying.

SQLite Expert works great for initial database design. However free version has some serious limitations that may easily be deal killer.

It is quite good for a novice (like me) and I am going to stick with it for now. However I am not qualified to make judgment if pro version worth its money.

PS turns out AutoIt has SQLite implemented and ready to be used. Now that opens some possibilities. :)