I had covered my initial impressions of N810 right after purchase. Few months later and it is time for proper overview after many hours of using device.

Nokia defines N810 as Internet tablet. Considering N810 is out for a while and it is already second generation of Nokia tablets - it was years early. Design is: 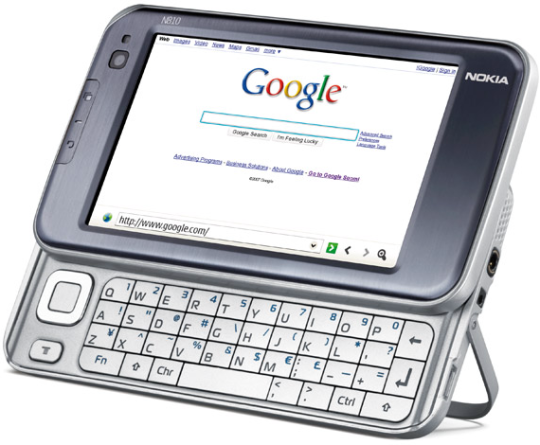 N810 runs Linux-based Maemo operating system. It seems usability was big priority because for most tasks it is very easy to use. Few separate factors where fit together very well:

Worth noting that this is strictly horizontal device for two-hand grip, it is too heavy and too long to be comfortably operated with one hand.

Software model was completely adopted from Linux. Native utility connects to online repository and provides list of currently available software that can be installed in 2-3 clicks. Updates are handled by same utility.

First update of operating system itself required reflashing (using PC), but further updates are also over-the-air, same as for software.

I hadn’t quite expected that but device is surprisingly good media player. It has regular 3.5mm headphone jack (!) and hardware is powerful enough to run some video on that wide screen. Dynamic video requires converting to lower resolution but for calm ones frame rate is reasonable even for higher resolutions.

There are numerous media players available for installation in addition to native one (that handles music, simple video, Internet radio and UPnP servers). I ended up using native player for music and MPlayer port for video.

I won’t claim I know a thing about audio quality, subjectively it sounds better than my Nokia E60 (I was using for player previously).

N810 has 2Gb internal storage and MiniSD slot on top. MiniSD cards are somewhat hard to buy around here (MicroSD with full SD adapter are common) so I hadn’t bothered to get one yet.

Connection to Internet can be done with Bluetooth through mobile phone or Wi-Fi. Mobile phone functionality feels missing at times but instead device gained exceptional battery life. Over 4 hours constant Internet connection usage is normal.

There is integrated GPS module but quality is questionable. Cold start is extremely long (took me almost half an hour to start it first time) and it likes to lose satellites. One of the most complained about aspects and the one I luckily don’t need much.

It is important to understand that N810 is not an mobile phone replacement. It can work as extension to one or without one in Wi-Fi range but doesn’t provide much of voice connectivity.

Device is seriously best thing for messaging ever. It handles:

Basically it connect to everything and despite all touch-hype QWERTY hardware keyboard is still best way to get some messages typed.

Sad part. For such network-centric device browsing sucks. Early OS versions had Opera that got swapped for MicroB based on Mozilla core (think Firefox with Maemo-style interface). It was apparently served as big open-source win… Know what? Screw open source, I want good browser and MicroB isn’t one!

Did I mention it is slow?

Actually for mobile-optimized sites it works quite well. But regular browsing is self-torture. Firefox (Fennec) is months (years?) away for providing usable mobile browser and MicroB, despite clean looks, is totally patchwork. Oh and it is the only app capable of crashing Maemo that otherwise runs weeks without reboots.

No alternative browsers just finished me. In the end most of my browsing is between Newsgator Mobile and Mobile Wikipedia.

Hardware keyboard is excellent for typing but joystick is terrible. With most game ports not doing well with touch screen controls… Gaming on N810 may help to kill ten minutes at best.

ARM processor running Linux. Kind of holy grail for Linux enthusiasts. There is happy established community and their tablets are getting a lot of abuse experimenting. I had seen reports of N810 running Android, Ubuntu, etc… VMWare had even demoed N800 running virtualized Android and Windows CE at the same time.

I have little interest for installing alternative operative system at moment. But if someone gets Android (or anything else with usable browser) to stable level I just might.

What’s good that Linux part can be easily ignored, on the surface device is friendly (much more than Symbian for unprepared).

Interesting and useful device that came ahead of its time. Next generation of Nokia tablets is supposed to come out this year and it just might set the tone of pocketable Internet for years.

I had read interview with Nokia executive that mentioned Maemo is one of three core platforms for Nokia (other two being Series 40 and Series 60) so they are very serious about it.

Look up Nokia N810 at Amazon