I wasn’t going to make any more computer-related purchases this year, but my trusted Logitech MX500 mouse decided to die (got like eight years usage out of it) and send me for upgrade.

After some deliberating and checking actual availability I went for current top of the line (among general-purpose Logitech mice) Performance MX – large, wireless, 6-buttons (not counting wheel) mouse. 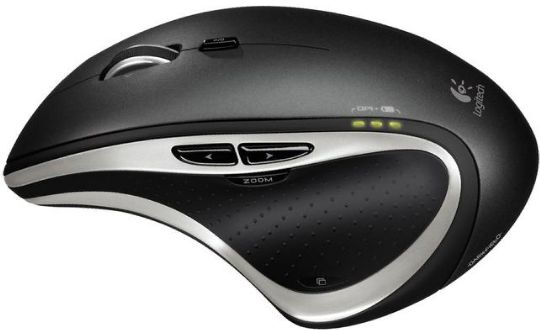 Receiver is one of those tiny things, barely sticking out of port and supports Unifying, meaning you can use multiple Logitech devices with single receiver.

Mouse is powered by single rechargeable AA battery. It has no docking station and is charged through standard micro-USB jack that is positioned so it kinda turns it into regular wired mouse. You can keep using it while charging. Just how many years it took to make wireless mouse this usable? As far as I can tell cable isn’t used for data transfer (feature seen on gaming top of the line rival Logitech G700.

Battery position makes mouse very unbalanced. It is fine on surface, but very awkward and uncomfortable to lift.

My only gripe with cable is that it could me mini-USB instead, enough space on mouse and I use that one for my e-book reader.

Hyper-speed scrolling wheel is no longer novelty, but clearly feature Logitech sees as important and worth implementing in all top mice.

I actually have mixed feelings about this one. Scrolling itself works just fine. I don’t have constant need for fast scroll, but you can switch modes instantly with button without moving the hand.

Problem is – such wheel obviously have much more complex mechanics inside. As result wheel click is very very stubborn. Some people online just regard it as defect of model. It works most of the time, but sometimes you don’t press hard enough or get angle wrong and it fails.

Left/right scroll is weak as well. It’s hard to use and is flaky in some applications like Total Commander (I am not entirely sure is it because of hardware or software).

Since MX500 used as ancient MouseWare and Logitech didn’t bother to include support for old models in SetPoint software it is new for me. It does all usual things like batter charge monitoring and button assignments, but there are some interesting extras as well.

Very comfortable mouse and well-implemented wireless aspect. My only gripe is with wheel, I feel that Logitech had slightly compromised usability for hyper-speed scroll marketing.