I am not too good with post series and comic strips were turning out to be annual feature (part 1, part 2)… Well, it hadn’t been a year so plan kinda failed.

I had picked up few real gems since last time and felt bad just sitting on them for that long.

This on is probably one of more known comic strips, but it took me few attempts to really get into it. Maybe something changed with it, maybe with my sense of humor. Comic is mostly about twisted logic and highly inappropriate situations it leads to. :) Out of the box thinking at its best (or at least funniest). 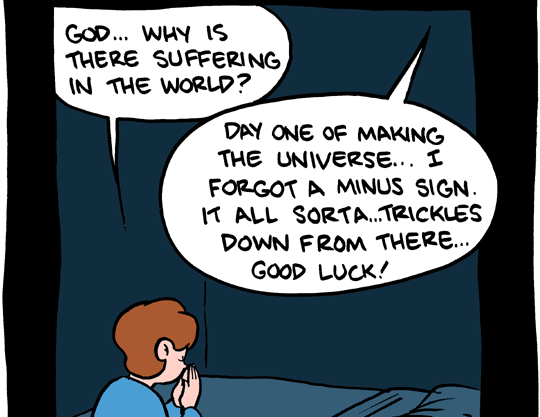 Suggested by Siro in previous post this one is much like one above. Except that logic is not as twisted as deadly… logical. And pure logic is not something irrational people are good at appreciating. Comic regularly kicks science, religion and things in between. Atheism and/or good common sense recommended for reading.

Comic covers advanced stages of gaining knowledge, yay! I read it purely for bringing back that satisfying feeling that I somehow survived university and not going back there ever again. This one is nice mix of nervous and relaxed humor.

Hardcore gaming comics with lots of references to mainstream games and gaming news. Seems to be somewhat slanted towards making fun of developers even more than gamers themselves. Makes me happy that I pretty much dropped gaming and didn’t turn out as image above.

I find it curios that comic strips I like tend to be tangential to my core interests. Not too far… But not too close either. I guess exact matches strike it too close to home. :)

Have a favorite comic strip, not yet featured at this blog? Please share it in the comments!