Appnews.net is up for a week. Yay.

In such a short time it had easily surpassed (in some aspects) Rarst.net and generated plenty of interesting stats and opinions to crunch.

Site itself went up almost perfect except two minor issues – broken twitter buttons and I accidentally rolled back footer from final version.

But @appnews mirror on Twitter was complete wreck. I hadn’t setup it earlier and when I did – it had been right in the middle of twitterfeed having ton of issues. At first nothing worked, then overnight items went up with dead links because something went wrong with my bit.ly API setup. Twitter launch fizzled, will see if that part recovers with time. 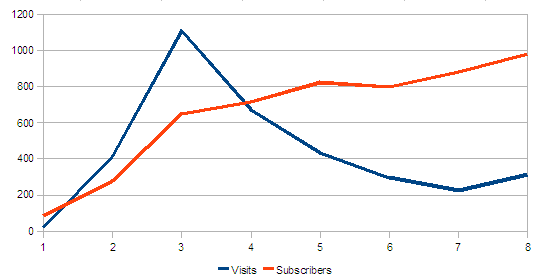 As of now it almost reached thousand subscribers (not counting half hundred followers on Twitter). Site displayed very high subscription rate (over 30% of unique visitors).

Freeware Genius was main traffic driver - accounted for 50%, with next highest gHacks sending only 6%.

Aside from introduction posts:

it hadn’t made much of a splash. Some short posts went up:

No one of larger crowd that so likes to pillage gHacks and Freeware Genius for topics took notice. Too personal of a project I guess.

There are three types of feedback project got:

So main motivators are trust to favorite blogs and narrow focus.

As one of my long time readers @fernandoariotti put it in his tweet:

Design is secondary feedback topic. In this week I was informed that Appnews looks great, boring, good, nicely minimalistic, too wordy, lacking color and fucking ugly.

Well that design obviously doesn’t get in a way of conversions and cost us nothing (kudos to TheBuckmaker and GPL). Gets job done.

There are quite a few various offers and suggestions piled up already. It’s too early to decide strategic course and a some requests are very complex comparing to current Appnews setup.

Personally I want to try widget/informer angle but no promises on that.

So had you subscribed to Appnews yet? What’s your take on service?