There had been some tension around Unlocker among techies, after few recent versions came with stuff bundled (effectively switching app from being freeware to adware).

I caught few mentions of LockHunter (app to unlock plus delete locked files and more) both in and out of this context and decided to check it out.

As any other app of this kind LockHunter takes something in file system as input (files, folders and drives so pretty much anything). 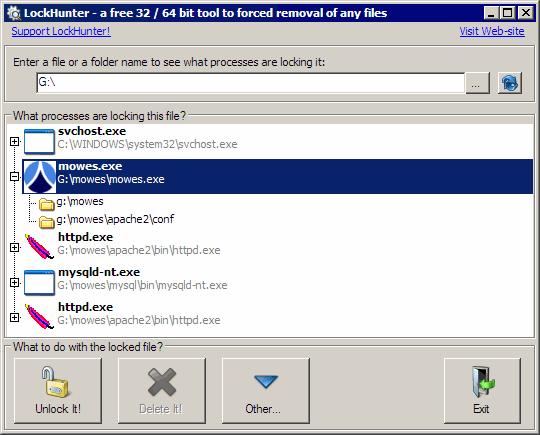 Then attempts to determine what has it locked to (optionally) perform unlock and delete.

What I like most about app that it focuses not only on delete itself, but on related processes as well. It visualizes nicely what processes have target locked and which files/folders exactly.

It also has cool (and potentially very destructive) option to delete files of all processes that lock file, instead of file itself. Very interesting and potentially awesome feature for cleaning up malware, will have to test in some real cases to evaluate.

There are both 32 and 64 bit versions available, important since most older apps of this kind don’t work on 64 bit Windows installations because of driver issues.

Seems to be stuck in eternal beta and lacks portable version.

No drag and drop support. I am no fan of file selection dialogs and only FlashFolder makes them usable for me.

Solid utility with some distinguishing features, but sadly stalled development.