Few evenings ago I was updating Appnews as usual and DTT description caught my interest. Most of the time while working with code I am torn between holding snippets right in Notepad++ in a beautiful mess or in highly organized but less suitable WikidPad. 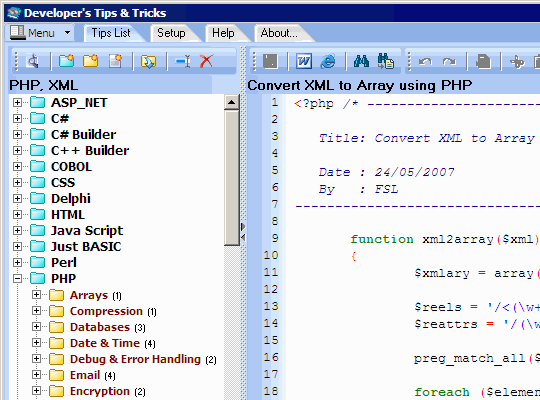 It comes pre-filled with some snippets and few separate packages of those available for download on developers’ site.

All code is automatically highlighted and saved on disk with folder structure duplicating internal tree and fitting file extensions. Images are supported as well (as separate entries).

App is free for non-commercial use (which is already considerable limitation in context) but some features are limited to version released to those who made donations.

It would be perfectly fine except that limited features are:

DTT also has familiar looks of an exercise in re-creating standard interface elements without good reason to. Which as usual feels familiar and like interface from another planet at the same time.

Oh, and silently adding itself to autorun is low, especially coming from program that works without installation.

I like the idea. I like it a lot actually – consolidating mountain of snippets and examples in few languages I currently use (AutoIt, PHP, C/C++) would be awesome.

But I don’t feel this is right app – losing search would be degradation instead of improvement and interface usability is… self-destructing.