I’ve been eyeing this one for years (literally). Kept talking myself out of it, because I don’t really mess with hardware in the field often enough and had cheap (and equally unreliable) tool that managed most common tasks.

Today I had great urge to buy something (two colleagues showing up at work with new notebooks do that to you) and some extra money incoming for extra work… So I went and bought myself this Victorinox pocket knife tailored to PC technician’s needs.

CyberTool 34 (where 34 is number of embedded tools) is mid-range model from Victorinox. It is part of their thematic lineup of pocket knifes, aimed at professionals in various areas. 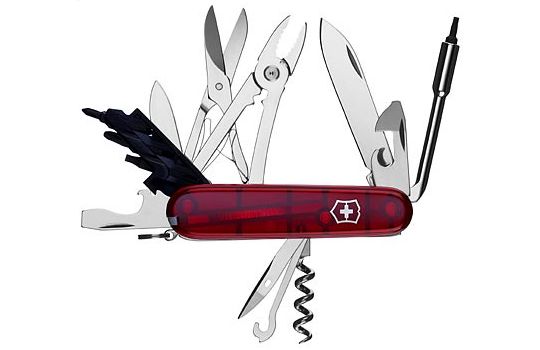 While thematic knifes are commonly simply fitting mix of standard tools, in this case Victorinox had to satisfy need for multiply screwdrivers and create a tool, designed from scratch.

Wrench/screwdriver is clearly centerpiece tool here. It offers double (5mm and 4mm) female hex drives, with smaller intended for bundled bits. There are four double-sided bits in total, with one in screwdriver and rest in special holder. Bits fit many computer-related screws including pozidrive and torx ones.

In addition to bits knife also has typical 3mm (on can opener) and 6mm (on cap lifter) screwdrivers plus really tiny screwdriver (inside of corkscrew) that turned out great to tighten screws on my glasses.

Computers or not, this one clearly offers most comprehensive set of screwdrivers among Victorinox pocket knives (although larger multi-tools can beat that).

Messing with Ethernet wires is also common computer task. Tools for this are easy to miss, but they are there.

Knife has two blades of different size and personally I am not a fan of classic form those have.

In some recent models Victorinox is moving on towards blades that can be opened with one hand and serrated edges. I would’ve preferred such newer blade, but there are no CyberTool models with such.

Some models also have blade called electrician and it would make sense to have it here instead of smaller one.

Oh, and transparent sides suck. I doubt person who designed them works on transparent computer so why? :)

I won’t even go into excellent steel and build quality, if you ever used Victorinox knife it is obvious to you. CyberTool models enhance set of regular tools with highly flexible screwdriver.

At long last I will forget about getting tricky screws with scissors lying around or curvy serrated blade on my previous knife. Now if only they made one for cat grooming… :)