In fixing up after my computer meltdown (yes, I keep talking about that – event of the year) I bought Asus P5Q-EM motherboard. It is positioned as home theater and energy efficient model so I was curious to see how good it would be for silent computing.

Since these are applied at the different times they are naturally both used and Asus provides software lineup to handle both tasks.

This one is supposed to be central hub to power saving features but except being installed there is no actual need to run it. 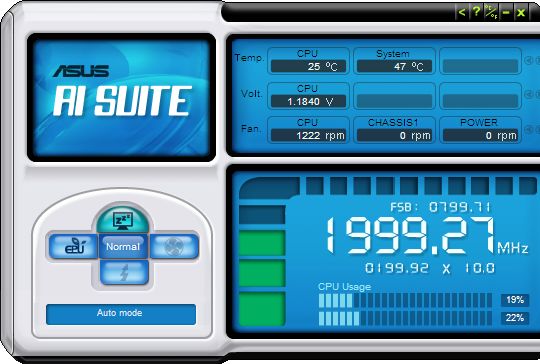 Ai Suite interface only provides shortcuts to other utilities and displays information about current computer condition. In really bulky way.

Out of four utilities overclocking and fan control are incompatible with power saving mode so I am skipping them. 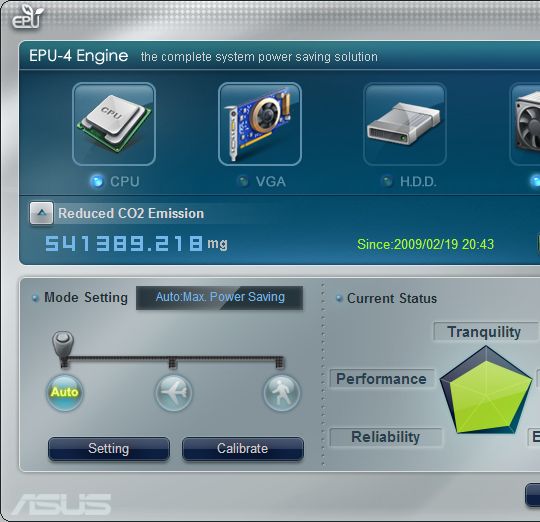 There are three profiles of operation:

It all seems very cute and useful. Unfortunately with my knowledge it took little time to understand that this is closer to smoke screen.

For my setup EPU Engine is frankly redundant. It either copies native Windows power saving functions or aims at PC with high specs so it has something to reduce.

Sending computer into sleep or hibernate mode means it stops all operation.

In practice it disables video output, sending monitor to standby. I can only assume rest is comparable (or equal) to running in power saving EPU engine mode. There is also additional prompt that asks if you really want to wake computer up.

Annoying issue is that Ai Nap hijacks hardware power button. Instead of starting shutdown routine it sends computer into Ai Nap. Took me plenty of failed attempts to re-learn using Start menu instead of simply tapping button on case to turn computer off.

Asus set of utilities puts up a nice front but doesn’t perform many unique functions. For experienced user and mid-spec computer this would be simple wasting resources on something Windows does anyway.

As for energy saving and silence benefit Asus utilities will only shine on high-spec gaming machines. Users of which hardly care about those issues anyway.

Anyway aside from software Asus P5Q-EM is actually good choice for silent computer with passive chipset cooling and relatively powerful integrated video. As long as you skip native software and spend some time learning up on Windows tweaks and using SpeedFan.