Rapid weather change and few hovering issues resolved really put me into lazy mode this week. I’ve felt like playing some game (which I don’t do often for few years already) and on a whim downloaded GunGirl 2 recently covered in post at Freeware Genius.

At first look it seems like a retro-style game about jumping a lot and shooting a lot. Premise of the game is world, overrun by zombies overnight and you on the quest to fix/kill everything. 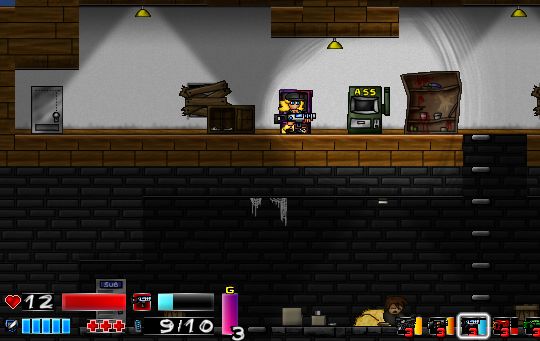 But after some time it hits you that game is very far from primitive. It takes old formula, but fills it with years of game evolution.

What I like most is that game is arcade but RPG elements give its gameplay depth. And not boring shoot-to-gain-xp elements, but clever, interesting and polished ones.

Games makes it worthwhile to explore and discover stuff, both for quests and plain increase of character’s mobility and firepower. It also makes it necessary to learn to control your character and adapt it to different locations. Straight blasting zombies only gets you through first third of a game easily.

Most of the enemies are concentrated in smallish areas with infinite respawn. Enemies are also spawned to match game progress so there is always just enough challenge to get through them. Bad part is sometimes you have to run around a lot, looking for stuff, and hacking through same spots times and times again get boring. Later in the game I just buffed up defense skills to the max and run through zombies when on quest errands.

Speaking about errands game desperately needs some kind of compass/hints for quests. On many occasions instructions for where you have to go are too basic and you are stuck running through every place in game you can think of. Since some areas can be closed at that moment you could easily be looking for place you can’t even reach yet.

Excellent, free and natively portable game. If this was released in golden age of platformers it would probably be crowned as one of best games in genre ever. Nowadays it is just wickedly good action game.