I had felt the need to diversify what my brain is loaded with for a while (brain not being loaded isn’t an option for mine). More so since my book reader died and I still hadn’t got to buying a new one.

I’ve considered picking up Magic the Gathering Online again, but I have less than fond memories on how much pressure to spend money it puts on you.

I heard about Hearthstone (online multiplayer collectible card game by Blizzard) in passing before and briefly saw it played at WordCamp Norway so I decided to check it out. 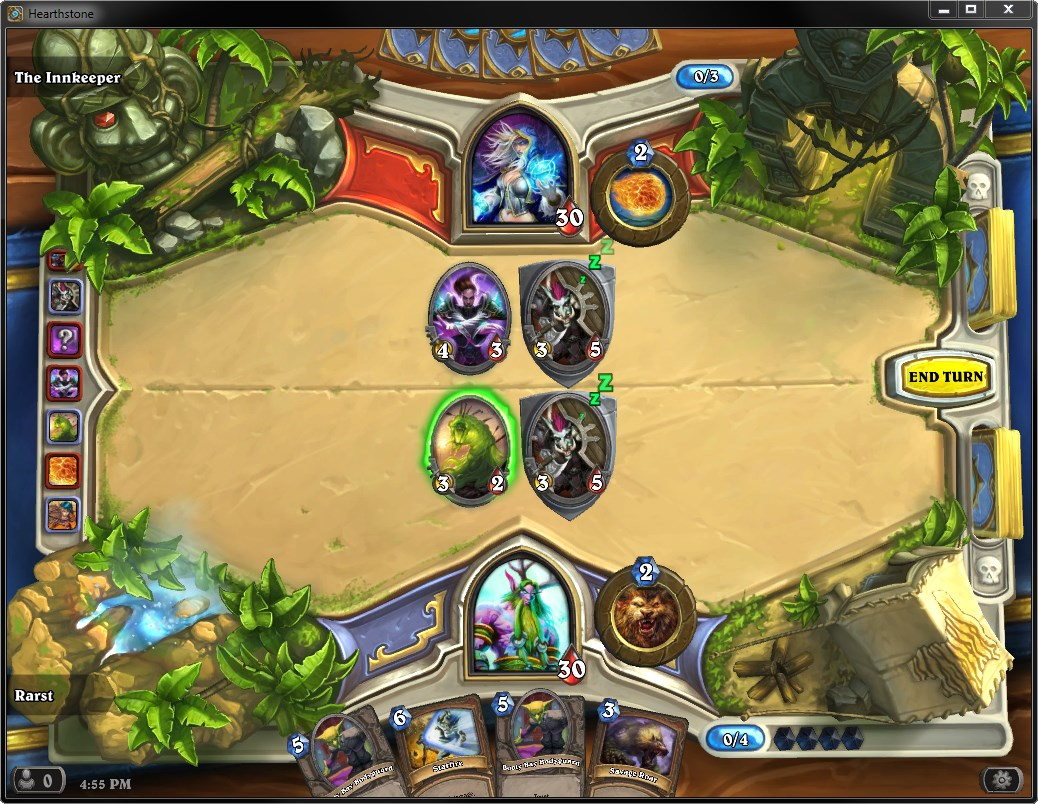 The first and lasting impression Hearthstone makes is how exquisitely designed it is. Unlike MtG it has no offline roots, but the interface is still extremely rooted in physics and animations.

However rather than try to rebuild a boring reality inside a monitor, the game spices is up with rich dose of style, sound, and magical animations. It balances on the edge of reality and fantasy. I think the closest feel I had from a computer game was chess with animated figures, many years ago.

An impressive aspect is that you can observe your opponent’s actions — going through their cards, “looking” with cursor around the table, considering plays with cards hovering.

Anyone who played MtG (or other combat–centric card games) before would feel right at home with Hearthstone. However it is refreshingly simpler and faster paced.

There is much less focus on mana management (no colors, steadily grows for each player as game progresses) and no elaborate phases of turn to follow (can do pretty much anything in any order until you are done with your turn).

However that simplicity is not to be mistaken for shallowness. The game is immensely tactical, fierce, and has tighter curve of card power — making it more complicated to win on deck power alone.

As with any free to play game in current market, the one important question is how desperate is it to nag you into spending money?

There are three things Hearthstone sells:

All of them can be purchased for in–game gold currency or real money.

Gold is earned through gameplay — just playing with others and related daily quests.

Effectively you can gain enough gold for one booster every two days or one Arena run every three days — indefinitely.

Expansion on other hand is priced quite high in gold and on such pace it seems to take a while to collect enough cards for serious competitive deck.

An interesting aspect is that Hearthstone is collectible, yet not trade–able. There is no exchange of cards between players and so no market. Excess cards can also be turned into arcane dust resource, which can be then used to craft arbitrary cards.

From what I’ve read online if you are open to spending real money on the game it would cost around $200–300 to have nearly complete Hearthstone collection. By comparison that much will barely get you one competitive MtG deck.

So far I enjoy Hearthstone for casual play and I am quite fond of Arena, though I suck immensely at it still. :)

I hadn’t dabbled in ranked (competitive play area) and I probably won’t for a while.

I think it fills the niche of something to switch brain to and unwind very nicely.