Kongregate is my usual choice to kill some minutes, when brain asks for something gory (in harmless pixelated way) and thoughtless. Selection of games refreshes very fast there and I was somewhat surprised to see Amorphous, which is quite old.

I didn’t get much into it first time, but given obvious staying power I gave second chance to this nice aggressive hack and slash game.

You are hero with giant sword, fighting weird stuff. That is pretty much all there is to game. There is bunch of explanations, but most of them are so verbose it just hides in plain sight mindless and over the top humor of text. 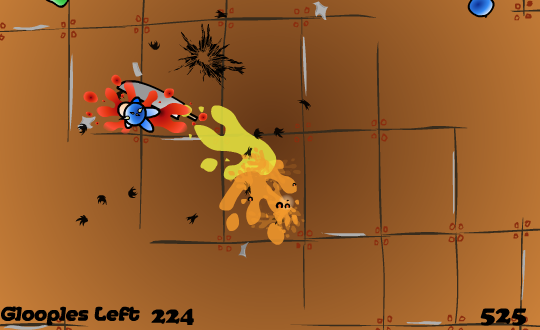 Gameplay area is single screen without terrain and with monsters incoming from the sides. Depending on game mode the goal is either to defeat certain amount or just stay alive and rack up score.

There are multiple kinds of foes and it takes a while to even see them all at least once. It doesn’t help that encounter with more powerful ones usually ends your character life very fast.

The one thing that game gets perfectly is that rare balance when you train your skills, not skills of your character. Aside from some items (highly useful, but limited and by no means overpowering) there is no improvement to the character. You have to make use of what you have.

While many games of this kind get boring, because of repetitive action of bashing monster horde, Amorphous is absolutely immune to that. Monsters are not only deadly to use, most of them are just as deadly to each other. Tactical situation on the field is always changing and you quickly realize that there are a lot of not so obvious ways to dispose of foes.

There is little meaning to the game. It is gameplay for the sake of gameplay, which might get shallow at times.

Complexity is also nothing to sneeze at. Don’t expect to beat this game in a sitting. It is easy to play but hard to master. Maybe somewhat overly hard for a casual time killer.

One of those small wonders of a game that remind of old classics, while being quite modern.