At times you click through to a game’s site and snippets from reviews are so glowing that you actually get an urge to try it. At least that is how it went with Desktop Dungeons for me.

The game is one of those brilliant contraptions that fakes the old looks for style, while offering enormous gameplay depth, honed by ideas from decades of gaming history.

The concept is simple, while the strategy is not: 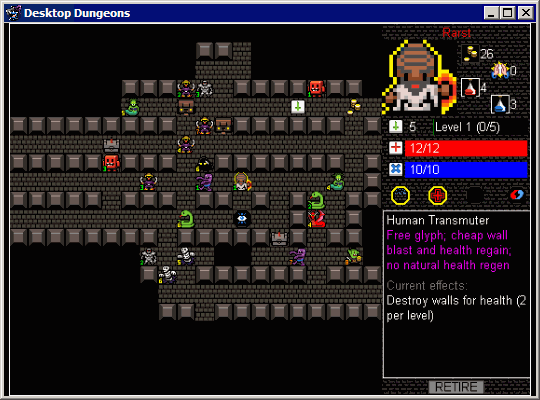 Straight out of any casual (or not so casual) RPG, right? But in reality Desktop Dungeons is much more of a puzzle and will require training and effort from your own brain rather than from your character:

So you need to deal with situation where you need to keep fighting stronger opponents on limited resources. Also every time you start from scratch and the only resource that transfers between sessions is gold.

The game has extensive unlock hierarchy:

Considering that common session is 15-20 minutes and there are over dozen of characters and half a dozen of dungeons… It is hours and hours of good gameplay just to try every combination.

Some aspects of game like gods and certain character skills are extremely confusing and can border useless (or even be shortcut to defeat). The easy way is checking game’s wiki, but over-reading it easily takes some fun out of figuring things out by yourself.

I am also extremely confused by game’s status. It seems to be freeware beta. Or maybe experimental build. Or demo of upcoming commercial game. I couldn’t make sense at all from developers’ site about it.

Don’t let the simple graphics fool you – this is well designed modern game that can take many hours to master (that is if you are up to the task).