Times when processor performance was gauged by number of MHz alone had long passed. There are a lot of factors that differ in modern hardware lineups and it may seem impossible do adequately compare performance between hardware of different age and price.

Company specializes in hardware performance and stress testing for years. Performance Test is one of core products, which can test multiply computer components and produce synthetic estimates, boiled down to single number.

Since app itself is shareware (with one month trial) I won’t focus on it, but on interesting things that happen with data. Software can submit test results to developers, which aggregate data and maintain number of extensive data sets, freely browsable online.

There are several sites maintained (more like parts of single site, but each has own domain) for several PC components:

There is clearly a lot of effort spent to make data presentable. Result are sorted by performance and separated into groups by budget tier. 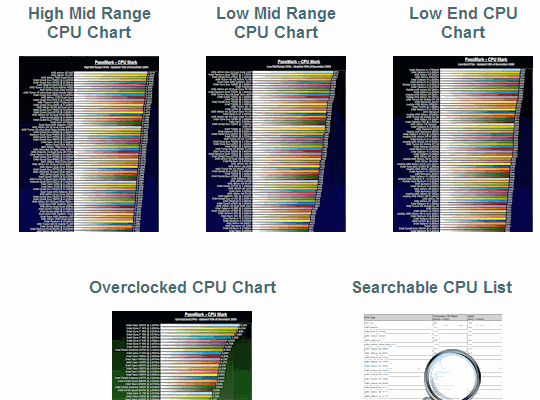 For each entry it shows on hover number of samples submitted. The larger it is the more generalized and accurate is final average value.

As with any data set it is extremely important to understand context and limitations of such data. Synthetic test are mathematical by nature and cannot accurately reflect performance in real-world tasks. They tell only how fast component is, but not how fast it runs real software.

There are also many factors that can influence test results, I’d say processors are least likely to be affected by system configuration and hard drives most.

Useful set of hardware performance data, that is free and convenient to access. It will not give you complete insight into performance, but is great to put parts into context of similar models.