At 100 subscribers I was wondering if it ever gets to thousand. At 500 I noted that I am halfway there. Strangely at 1000 I barely cared enough to notice.

Amount of subscribers is typical things to obsess over, but is number worth that?

The word subscriber itself is misleading. It brings up picture of dedicated reader, waking up with the sole idea of checking if his favorite blog wrote something.

Maybe some do. Not many.

Subscriber is probability that someone’s software is requesting your feed. Amount of subscribers is vague average of such feed requests.

What is perceived as person is really a decision by some person to subscribe in the past. Then it’s all software.

What software brings to the table

It is curious that feed formats add very little on top of content. Bulk of actual subscription experience is formed by software.

Here is breakdown of my subscribers, according to FeedBurner: 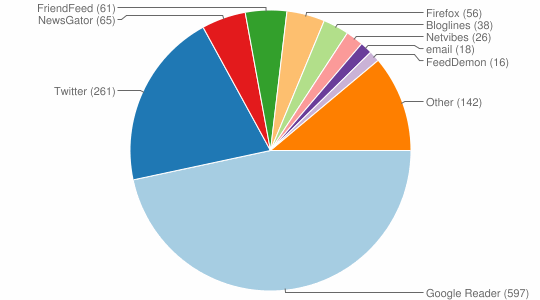 Before you wonder – Twitter is extra, added by me. It is topic for a separate post, but technically it does get blog entries to subscribers (a little less of a statistical entity there, but only a little).

Now look at that pie.

When I was writing this I wondered if I am coming as ungrateful. These are my subscribers after all, readers that made an effort and commitment.

Well, keyword is readers. I learned to care about people to whom my content is interesting and useful. And I learned to not care about numbers, that are just that – numbers.