Concept of stuffing few files in one is old. There are numerous archive formats that are actively used. Aside from usual archives plenty of installer packages (or even executable files) use some form of compression and can be extracted.

I had recently posted on TrID that helps identify file types. That made me remember another closely related program that deals with archives – Universal Extractor.

Universal Extractor is complex script (written in AutoIt) that acts as frontend for included collection of unpackers. It identifies type of archive using TrID and attempts to use fitting unpacker. 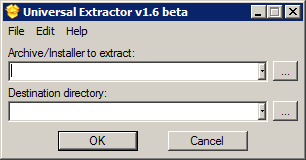 App doesn’t do anything complex but saves time required to find tool to unpack specific archive type. It is more of a tools bundle than single program.

Because of bundle design you can simply replace outdated unpackers yourself but that reduces its value as time saver. I’ve also read on forum that TrID included in Universal Extractor was modified so updates from it doesn’t fit.

In my opinion even if it doesn’t work with specific file it still has good chance to. Nice starting point.

Freeware and open-source. Often described as portable but I had seen plenty people saying that it both writes to registry and leaves log files around. Works without installation describes it better.