I have been using PC Wizard for last few years and got a little bored with it. At times I got lost in interface and it consists of multiply files and folders, which can be inconvenient for sync or quick download.

SIW is one of alternative software and hardware informational utilities I had bookmarked (twice) to check out.

SIW is single-file portable app that can report large amount of information about computer, including (but not limited to) such things as hardware, operating system and network configuration. 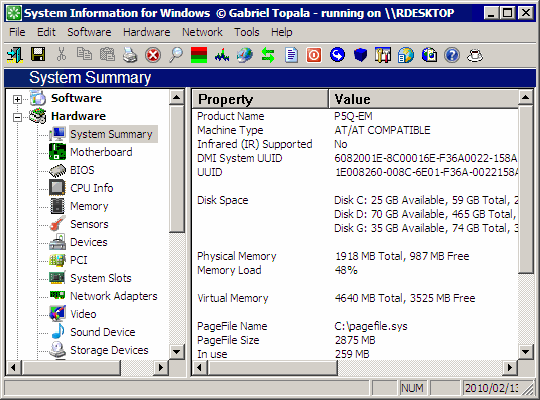 Most of information is presented in informational area, next to navigation tree. There are also some embedded tools and graphs that launch in separate windows.

App does include shortcuts to some Windows system utilities in menu, but there is no way to make changes or launch related consoles from informational area itself. You can look, but you must figure out yourself where can be tweaks made in Windows.

There is standalone version that works without installation natively, but it does create some DLLs in system temporary folder. I don’t really mind such behavior, but it would be better if they were created in app’s directory instead.

Free version is for personal use only. It is fully functional, but lacks extensive report and command line options.

I quite like how app is designed and that it is easy to use and transfer around. However personal use limitation is quite harsh because frankly there are just as good apps without such around.