General purpose hardware/software report tools are not exactly in crowded software niche. Since ancient times (like before Windows existed) plenty of such tools died from strain, trying to keep up with annually (if not monthly) changing hardware market.

PC Wizard from CPUID, which was updated yesterday to 2008.1.85.2 version, is one of the few alive and working. And freeware unlike well known Lavalys Everest that went payware long ago.

What can it offer if you need such reporting tool (or even if you don’t)?

Any app of this class can be divided into four main parts. 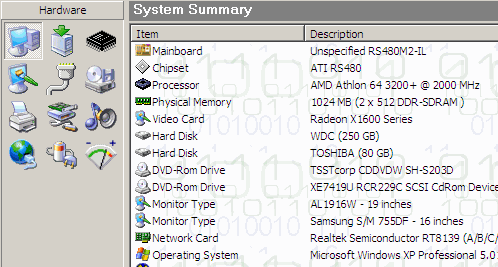 PC Wizard is top-notch at this, every topic is only one-two clicks away. Information is well sorted, formatted and easy to read. There is both enough to understand from quick glance and more deep stuff when you start clicking specific devices and their properties. There are also few lines of realtime temperature/fans data appearing on desktop by default. Really geek ones have option of streaming that to LCD display of their Logitech G15 keyboard (I don’t do it, honestly). :)

Software reporting
Since software reporting is more like asking Windows what it has to say and presenting it to the user - PC Wizard offers a lot. Probably too much. Trying to read through everything from desktop settings to OS configuration files gets boring quickly and rarely needed if not on deep troubleshooting run. 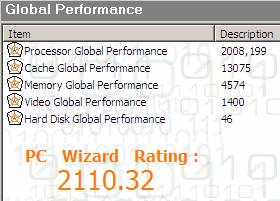 There is very simple stability test, it only puts load on processor and it’s for best to ignore it as insufficient. Benchmarking has nice “global performance” module which produces synthetic graph and some reference systems to compare with.

MP3 compression test is surprisingly real-world in nature and even requires audio disk (with option to keep ripped files). Rest are hardly interesting, it’s not really important to know something gibberish like throughoutput of L1 processor cache.

Data export
PC Wizards offers TXT, HTML, RTF, PDF and CSV formats for saving reports. They only include text information and saving graphs is made through F11 hotkey that produces BMP screenshot. There are command line options described in included “readme.txt” that allow scripted reports - for the price of losing RTF and PDF options. There are no variables to put into filename or fancy remote capabilities so it is going to take some heavy scripting to use it for harvesting data over LAN.