When I switched from Opera M2 to Newsgator I had expected better performance on desktop and ease of use away from it.

What I hadn’t expected is cutting amount of time to go through feeds by half.

When I moved my feeds instead of plain OPML export/import I did it case by case. Aside for cleanup effect I also decided to leave software updates and similar in Opera. Selection of feeds in FeedDemon became easier to read and simpler to distinguish important updates from minor.

I had not yet tried to separate into folders by topic but this seems next logical move.

Both Opera and FeedDemon has three same interface zones: 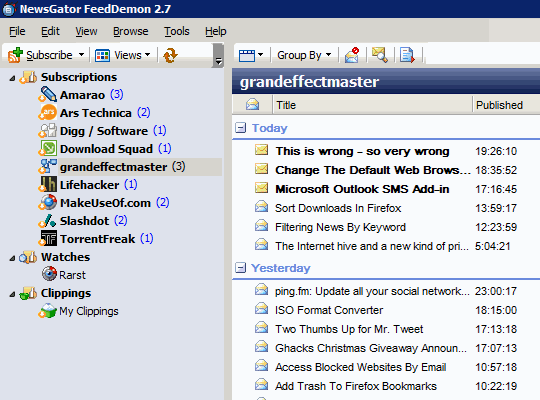 However some small details of FeedDemon shined in long run:

Doesn’t seem like much? But it really adds up – saving time on looking for updated feeds and going through items.

Most important feature I discovered in FeedDemon is option to mark feed as read when you leave it. At first I thought it just saves press of a button. Then I understood that it forces to take action.

In Opera I often took my time jumping between feeds, saving items for later. Sometimes entries were stuck for days. I have no such luxury in FeedDemon – when I open feed I cannot leave without marking it as read and poofing from my view.

I removed option to procrastinate and forced myself to make a choice:

Getting rid of “deal with it later” way out became excellent productivity decision.

I had used RSS feeds for a long time in Opera and had never thought that my experience is limited. I was content with good enough and how many hours it cost me over time? A lot.

Had you ever thought about the way software helps (or hinders) you to consume information online?