Software bloggers have to snap and process a lot of screenshots (unless they write crappy news fluff). And from those whom I know we agree on two things: 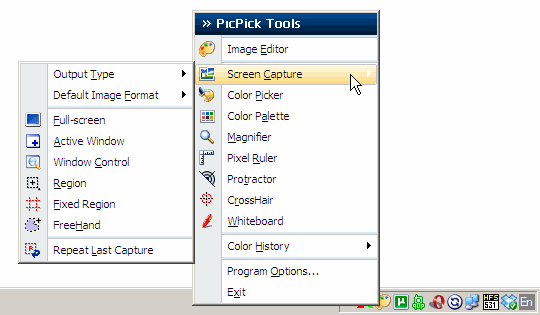 App has no window or toolbar for calling tools, only tray menu. Most functions can be called with hotkeys (as it should be) and app is nice enough to provide FSCapture-compatible hotkey set.

As there are many ways and habits to take screenshots PicPick caters to that with quite extended list of functions, not worth blindly repeating. What I liked most (probably for being missing in FSCapture):

While PicPick goes further than FSCapture in some areas it still doesn’t fully replace it at moment. But with ongoing and active development I can easily expect that. Even as is – it is excellent, freeware screenshot tool with completely portable version.