I try to stay away from cutting edge releases and let things cool off. But YSlow is one of my favorite web development toys tools and newly released Page Speed is perfect rival for it.

So two tools, two huge companies, both want to help us have better web pages. Who is better?

I am no optimization guru. Just a techie who likes fast and responsive sites and wants his blog to be one. I guess exactly someone such convenient and simple to use tools are made for.

Since both tools use roughly same set of rules for their evaluations their core function is almost identical. 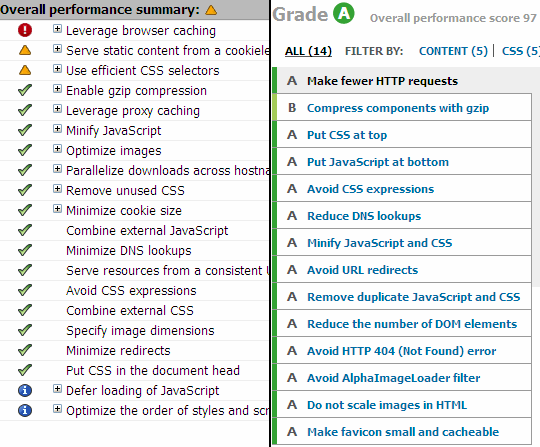 What differs are additional functions.

While YSlow had remedied my last gripes (mostly habit of assuming my tiny blog could benefit from worldwide content delivery network) Page Speed brought fresh ones.

I had noticed that Page Speed offers minimized versions of scripts and images already from my hard drive (these have to be requested manually in YSlow). And bingo –

Which would all seem like sane choice unlike profile root. At least it had courtesy to delete files (not folders) on closing Firefox.

Update Page Speed now uses sane temporary folders for those files on all platforms. :) Excused on this one.

Frankly large reason I try to stay away from desktop software by Google is their sickening habit to treat my PC as their own, filling it with files and background services as they see fit. Is there no one working for them who has clue about portable?

While Page Speed brings some new powerful functions to the table, overall first release feels like what it is – internal tool released to the public.

YSlow has edge – around for longer, more developed and more convenient.

In the long run if Page Speed can throw YSlow from the throne will depend on amount of effort and open source contributions it gets.