#StandWithUkraine
PostRank had been acquired by Google in June 2011 and shut down in May 2012.

Since then service journeyed through closed beta in which I inactively (sorry) participated and re-emerged as new PostRank site.

What it (still) does

Functions are still exactly the same. You input feed or site URL and get ranks for each post . If you had previously used AideRSS your feed is still being tracked. Otherwise you’ll only get results on recent posts and it will start tracking feed from this point.

Re-branding and other changes

PostRank is core technology developed by AideRSS company for AideRSS service and this service got rebranded from AideRSS to PostRank. You got that? Not sure I did. :) As official blog put it :

One of the reasons for moving focus away from the AideRSS name is that people tended to stumble over it — misspellings, problems remembering it accurately, and it didn’t seem to clearly communicate what we do.

Whatever. Together with name change service lost its jumping bear mascot and got new (way more businesslike) site. I like new design but it lost plenty of static informative parts in favor of dynamics and on-hovers. 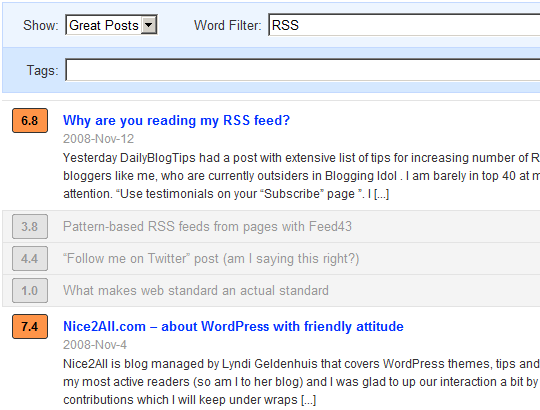 Home page also got big “Engagement rankings in the blogosphere” part that shows different feeds with cryptic percent values that supposedly mean something. :)

Service obviously moves in some direction but I am not sure I can understand that movement. I still like core idea a lot and still miss details and specifics of how ranks are calculated. On other hand I have a feeling that ranks became more precise and reliable which is most important feature here.

I am not yet running around suggesting it to everyone (which I do with Skribit a lot :) ) but more good changes and I just might start to.