The curious thing about IT is how easy to envision things, yet how insanely long it takes for some of them to become real. The files are ancient, but it took decades for Dropbox (the golden end–user file sync standard) to appear.

I jury–rigged basic torrent–based file sync years ago, but it took plenty longer for complete solution to appear out of available building blocks. BitTorrent Sync uses torrent technology to sync files, which puts it in some ways ahead of established file sync solutions.

The task is pretty much as it always was — given two (or more) computers, connected via network, keep some (or horribly many of ungodly size) folders of files between them in sync.

There are quite a few services (starting with, or rather being popularized again by, Dropbox) that offer this kind of connectivity and cloud storage. The options are more limited for requirements that make services unwanted — such as available space, security implications, and bandwidth performance.

The torrent protocol had been supremely popular for peer to peer file distribution, not involving centralized services or accelerating them. BitTorrent Sync is a software (from torrent’s protocol parent company) that uses much of the same technology for private file synchronization. 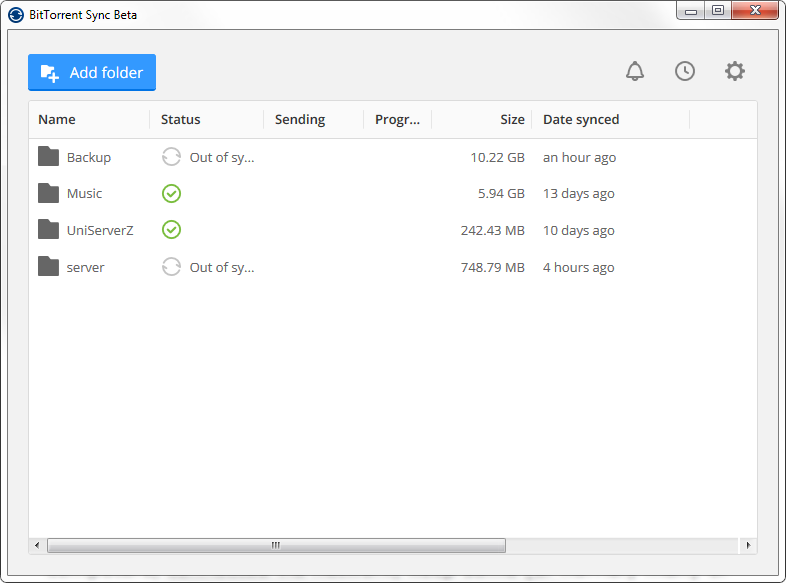 After installing the client you share the folders on device and pair them with other devices. Folders can be shared for two–way sync or read–only mode to send files off, without accepting any from other computers.

Just like in a torrent network every device can both receive and send, accelerating the process and availability.

Unlike cloud–centric services there is no remote storage component. The software will use remote servers to help establish connection (important and necessary when computers dont “see” each other directly in network sense), but it won’t store any data in the cloud.

So for better and worse you only have resources of your own devices. This means that you have no artificial (and sometimes costly) limits on storage size and there are no third party servers with your data on them (transfers are encrypted, so not even temporarily).

On other hands the sync only happens when sending and receiving device are online at the same time to establish connection.

Basically the software you get, but the infrastructure is your own to bring.

The good news is when Sync works it does so rather marvelously.

The network performance is very good (it easily does 90Mbit/s on my wireless network, which is about its ceiling) and sync part pretty much “just works”.

I was especially impressed with Android client (and Sync running on pretty much all major desktop, server, and mobile platforms in general). Sharing my music folder and scanning QR code with my phone was about easiest way to get large folder to it ever. Well, easiest since Google crippled phones from connecting as flash drives.

The bad news start when you throw less than easy tasks at it. My main web development folder is about 10 thousand folders, 45 thousands files — Sync was unable sync it even once properly. It starts on, then locks up, and worst of all there is little to go on about the reasons. It just cannot handle it and this is far from the worst case scenario.

So, a lot of mixed feelings. The technology is exciting, always was. The specific implementation is a little underwhelming. It’s beta to be fair, as much as beta means these days.

I am definitely keeping it for sync of non–essentials with the phone. My work however gets more reliably synced with dead simple robocopy command so far.

There is a lot of potential here (always was), but the current state is more of specialized tool and less of file sync holy grail. Let’s hope it will get there.