For a creature of habit I was never good at thoughtfully shaping my routine. I do the things I do, but rarely do I choose and pursue them consistently.

Lift site aims to separate itself from the crowd of task managers (todo lists with bells and whistles) by promising help with not just execution of tasks, but with cementing them into persistent habits.

While Lift sets itself apart conceptually, it is hardly far from todo apps in experience. The bulk of the app is the list of habits, which you pick (or create), put into desired order, and check off daily. 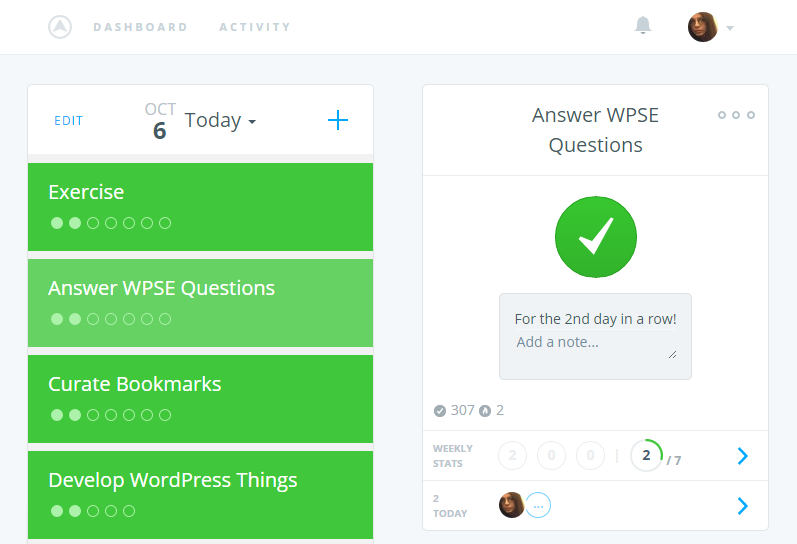 Since I started to use it, Lift experimented with a lot of interface variations and nuances of what exactly habit item is. It started with very basic check for the day and that is it. Later it featured streaks prominently — how many days in a row had you checked the habit without interruption.

Streaks don’t work too well for habits which are not daily kind. The most current take proposes to select target number of days per week for each habit. It makes most sense to me personally, except the start of week is annoyingly uncustomizable (Sunday in the app, Monday for around here).

Lift attempts to positively reinforce you in doing your habits by social and statistical features.

Social part flops for my taste. You can add friends to your list and people (friends and strangers) can give you “props” for checking off habits. Doesn’t do anything for me really.

It also seems to be focused on keeping this processes internal. I mean this is probably the one unique app with any kinds of achievements, that doesn’t horribly pester you about tweeting them. Which is probably the kind of social action I’d be actually up to now and then. 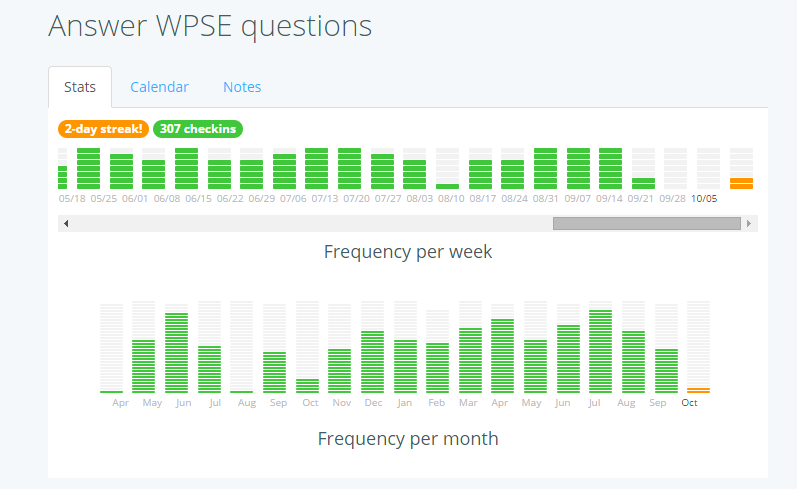 Statistics for the habit.

Statistics stuff is a little more to my taste, with graphical breakdown of how habit did over time. Unfortunately have to go dig for those graphs pretty deep in interface, so satisfying curiosity it does, but acting as reinforcing factor not so much.

App looks very nice and is highly responsive (adapting to the screen size). I actually keep it in the browser’s sidebar and almost never visit as full site in its own tab.

Unfortunately performance took dissapointing backseat to the looks. It feels consistently sluggish with unbearably slow initial load and regular hiccups on navigating or performing any actions.

I have also tried Android app and found it to be mere wrapper around the site. For a site which manages to be sluggish on a desktop with high–speed connection that is very much not a good thing.

After considerable time using it (profile tells me over 500 days and almost 2500 check–ins) I am not too sure Lift really delivers on creating habits. There is nothing on my list that I can think “should remove this because it’s ingrained in me forever” about.

However I think it is great app at habit maintenance. It keeps me organized, reminds me what I have left to do for the day, and does so without typical guilt spirals of making and forfeiting todo lists. Even if I miss or slack on something — every day is clean slate.

It might not be app I am highly excited about, but the sheer amount of use shows I am sticking with it and it’s being beneficial for me.