So, last week I did kind of preliminary post on my new Android phone (a lot of great comments, thanks to everyone). I got the device since then and spent several days tweaking and playing with it.

So what does Android platform offer when it comes down (at last) from the skies of ridiculously expensive flagship devices?

Phone proportions are close to that of regular candybar phone, rather than thin and spread out profile of phones with larger touch screens. Back of the phone is black glossy plastic with a lot of curves. Front has three hardware buttons and sheet of thick clear plastic that covers screen, but spans all of phone from from top to buttons. 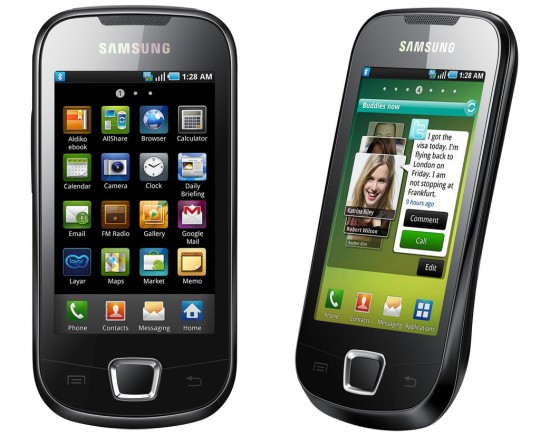 Data/power plug is micro-USB and headphones/headset is 3.5mm.

Screen is 3.2”, 240x400, capacitive. Resolution is obviously far from great. It took me days to get used to (my Nokia E60 had much higher pixel density). But other people mostly describe it as “fine” and objectively it is quite usable. Screen is very snappy and responsive to touch. Pleasure to use and keeps up even in highly dynamic multi-touch games.

Out of the box experience

I think the geek image of Android in media is grossly overblown. Out of the box it is just a touch screen phone, completely usable and convenient.

Aside from obvious power of Android itself, this one has official with Google endorsement (so it comes with most Google apps pre-installed) and Samsung’s TouchWiz 3 extensions.

I had my contacts synced with Google from my previous phone so I just punched in my Gmail login and I near-instantly had them imported (as well as Gmail app set up for my email). The annoying part is that Google-synced contact entry is not equal to entry created in the phone. For example you can’t (without additional software) set custom ringtones to Google contacts. Also Google is way too proactive in automatically including people in your contacts. It took massive purge to get phone free of who-the-heck-is-this entries. There is a setting to only show contacts with phone numbers, but it doesn’t apply everywhere.

I was slightly worried about typing on touch-only device. It turned out to be good news / bad news situation. Phone comes with Swype keyboard, which is absolutely awesome. It is actually more convenient for text then 1-9 keyboard on non-touch phone. On the downside it turned out to have no support for my native language. No idea if/when update is coming, really disappointed. So I have to switch between Swype and simpler Samsung keyboards. Notably native Android keyboard is not present at all.

There is powerful search function (widget or long menu key press) that includes anything in the phone (apps, contacts, etc), can quickly search in Google and allows third party apps (like dictionary) to integrate in their results.

Phone comes with Android version 2.1, which seems a little outdated. Official update to 2.2 is promised and no info if it will ever get upcoming 2.3 after that.

Samsung provides (download, no disc) Kies software for managing phone from PC. Phone can also be connected in USB storage mode (only memory card is accessible). There is Samsung Apps software store, but it only offers couple of widgets in phone app and in Kies it doesn’t work at all, citing Google policies as reason.

Andoid Market on other hand is very much usable (except no access to paid apps around here). By now software landscape for Android seems well developed and there are plenty of apps to try.

Most notable and useful applications so far:

For complete list of apps I use at moment see my AppBrain profile.

WiFi is highly unstable. This seems to be typical Android issue, I have google up plenty of mentions around, spanning multiple years, devices and Android versions. There are plenty of apps around that claim to fix it, some are clearly trying to cash in on the issue and scream how indispensable they are on every corner. I have tried few, WiFi Fixer seems to be only one that made a difference – connection got much more stable.

On the hardware side I find it very inconvenient that there is no LED indicator or anything on the phone. Screen goes completely dark when locked and you need to get to the phone and press some key to bring up lock screen and if there are any calls/messages/email available. There is an aptly named NoLED app that acts as on-screen indicator for this stuff, but it is aimed at AMOLED screens and on TFT one it naturally comes with price of reduced time from battery.

Solid and feature rich Android phone, with decent price that comes at expense of simpler screen with lower resolution.