Microsoft operating systems are not too shabby with backwards compatibility, but some things are well – too ancient. And really unaware of modern hardware (16MHz 80286 is more to their taste).

App creates window that looks much like usual console, but is actually completely virtualized environment. 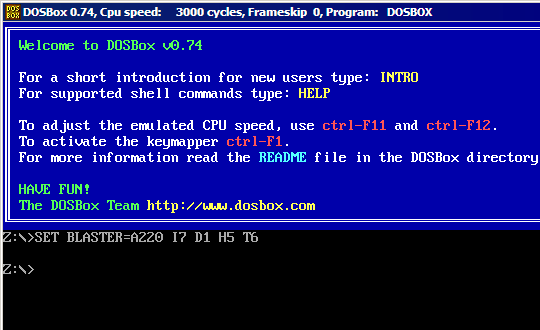 This allows it to emulate wide range of legacy hardware and speed up or slow down as needed.

DOSBox does not contain or require actual DOS files so it can be freely used without license.

What goes on inside console can be natively screenshoted and recorded as video.

It even supports networking to allow multiplayer over modern LANs.

Setting are saved into user profile folder. There is portable version by PortableApps, but as of writing it wasn’t yet updated to recently released 0.74 version of DOSBox.

App is closer to DOS in spirit than to modern software. :) There is some learning curve that starts with folders with applications to run must be mounted to DOSBox, using internal commands.

Anyway you are running DOS games, command line should not be scary for you. Stuff is well documented and there is number of frontends available that simplify settings and editing configuration file.

Great way to revisit some old games on modern computer.